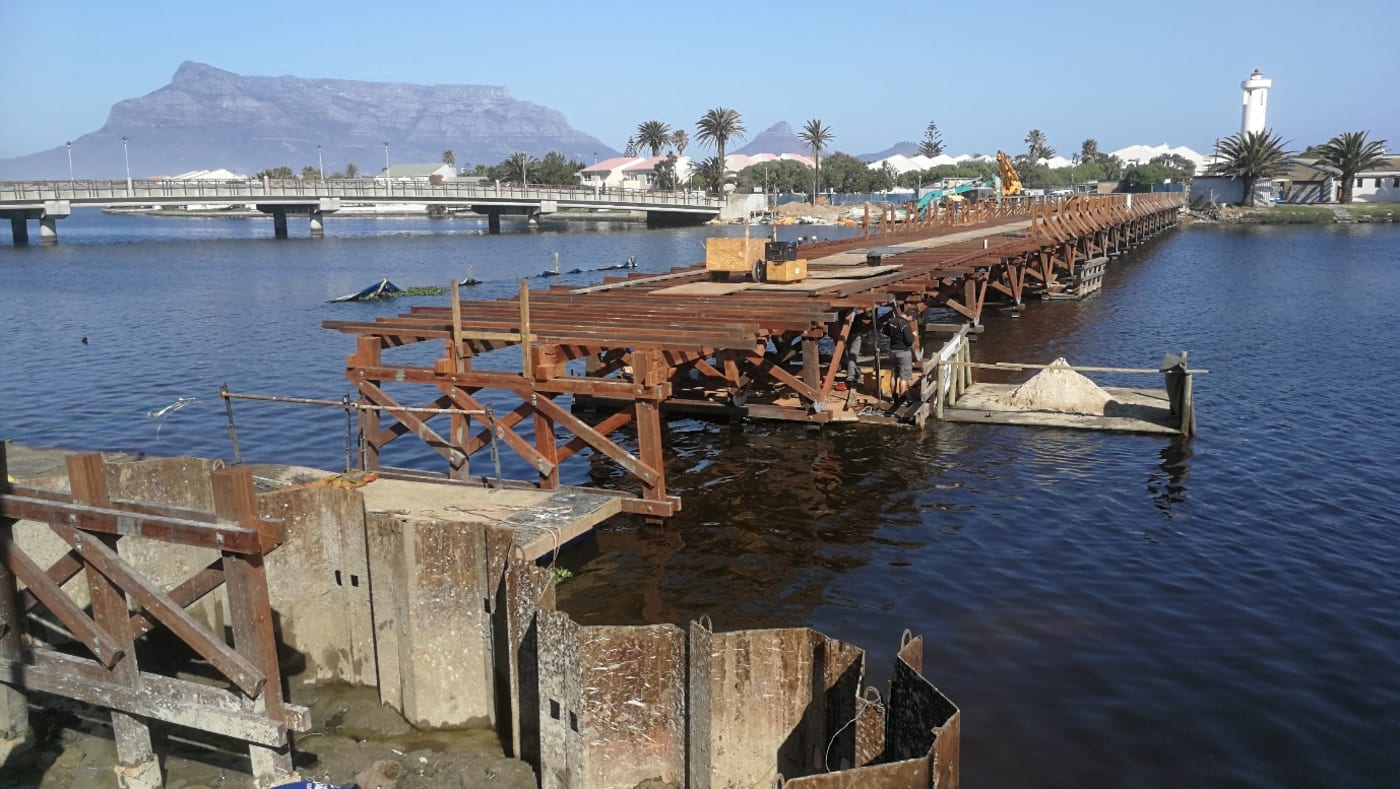 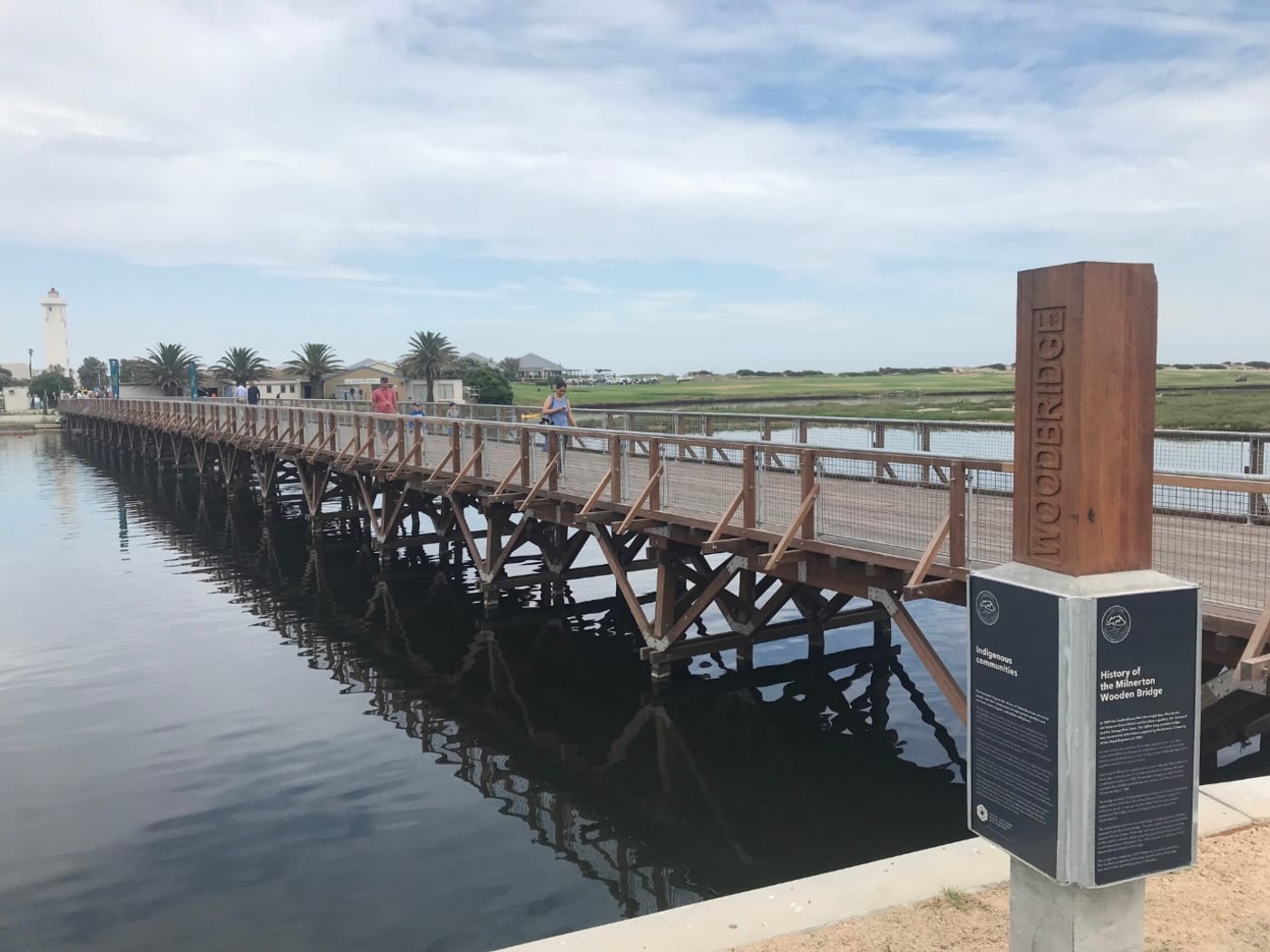 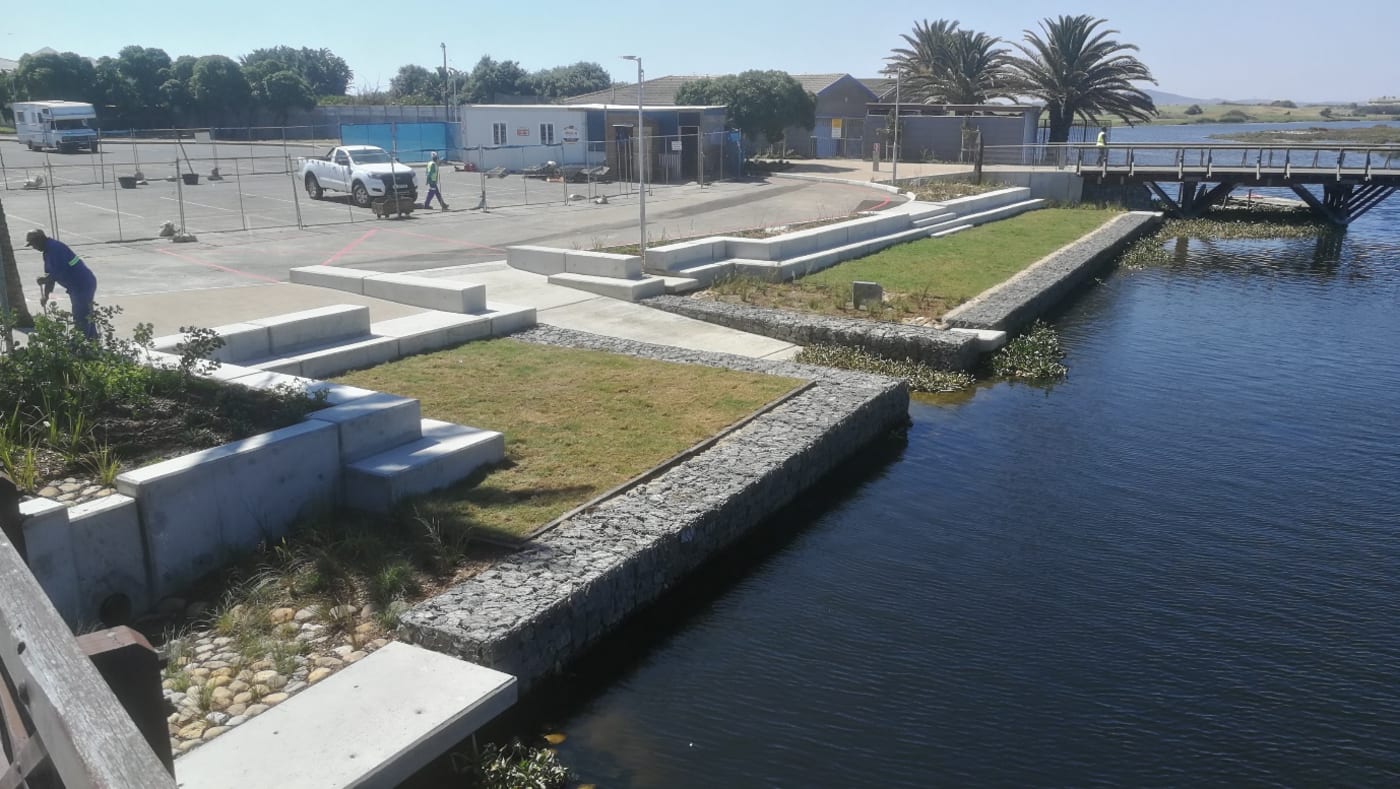 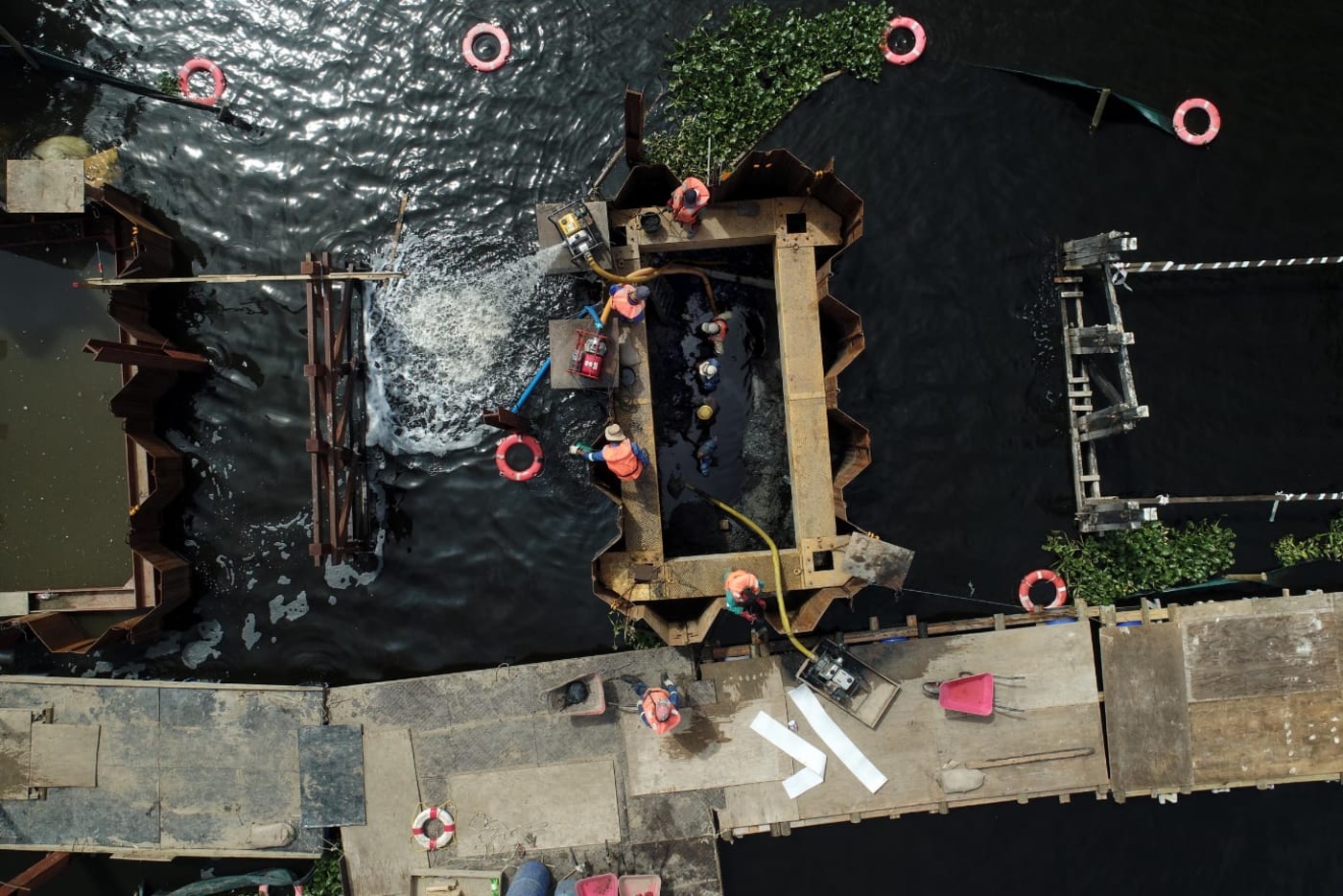 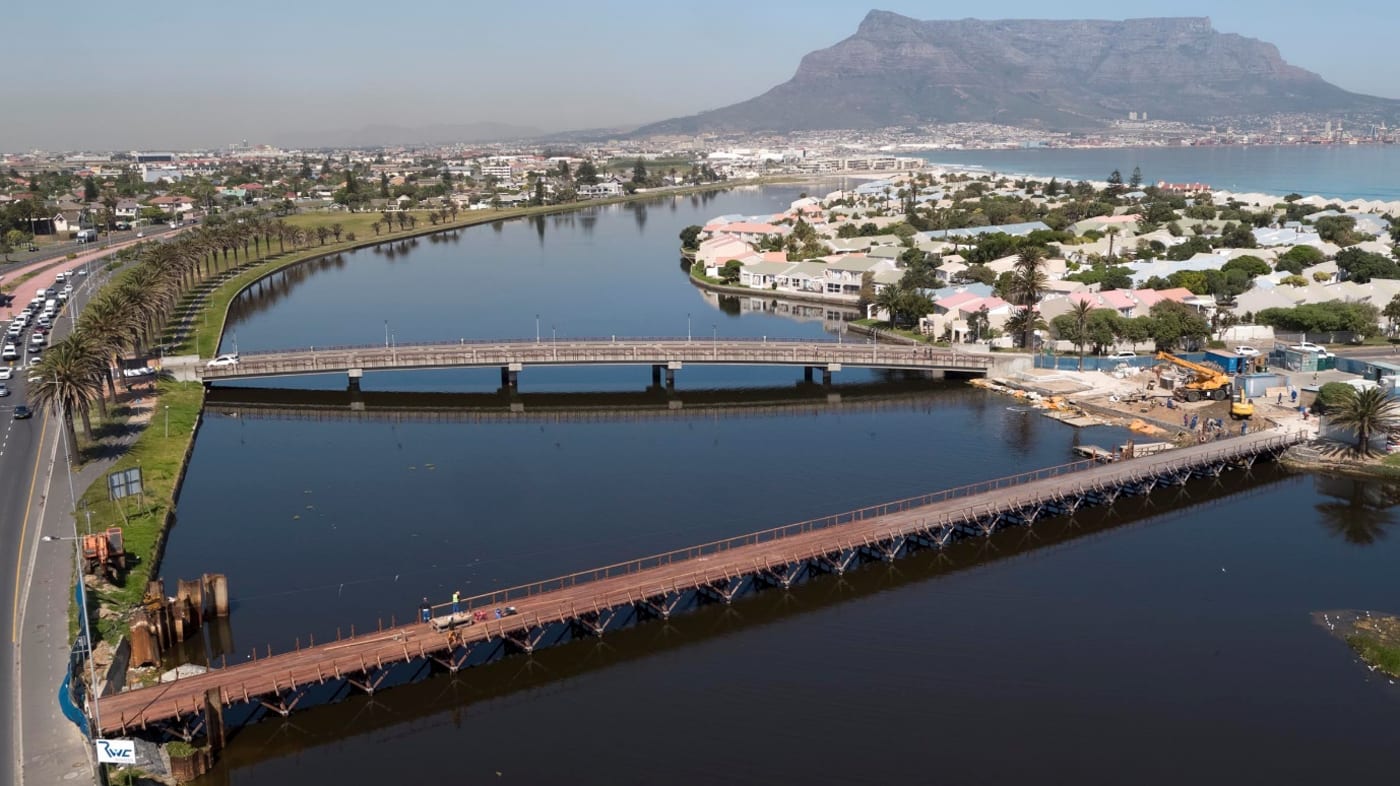 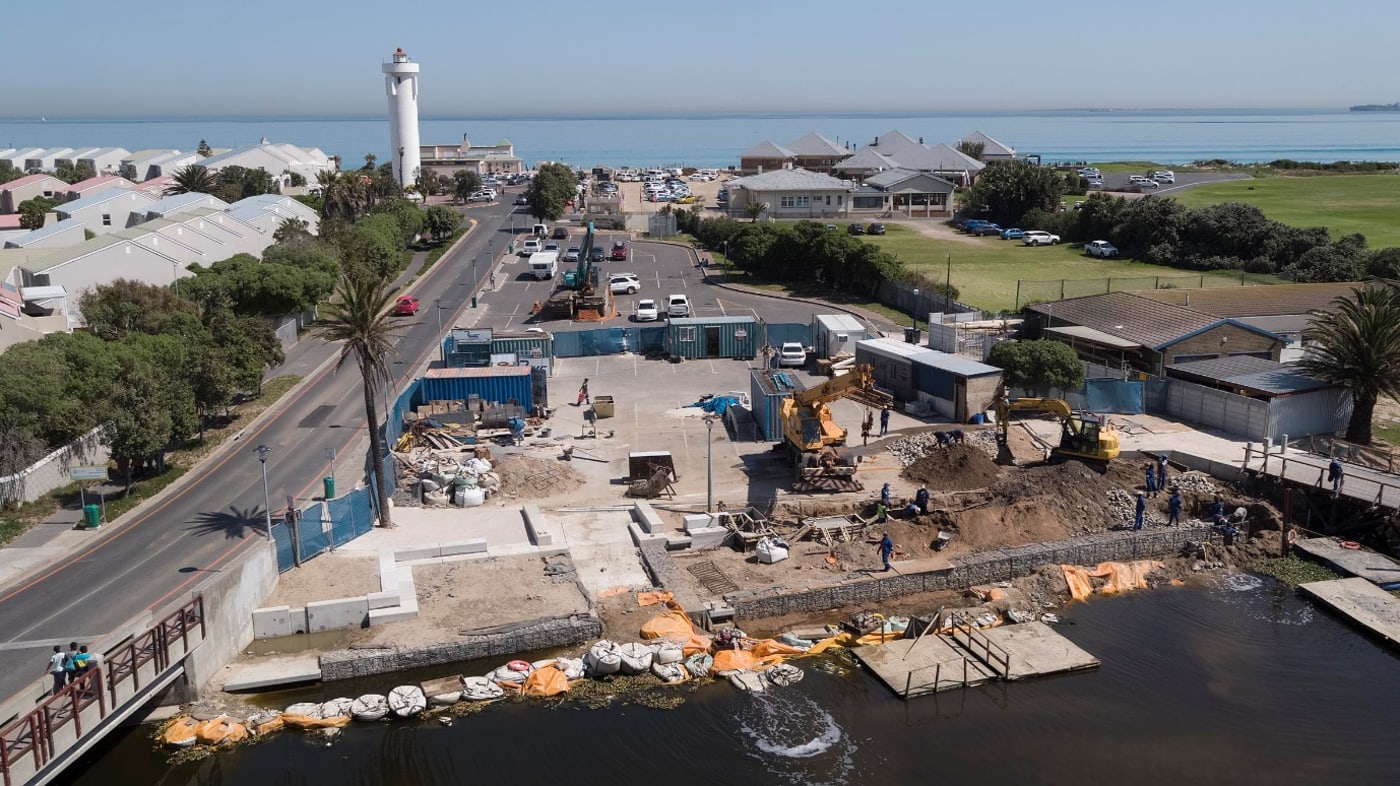 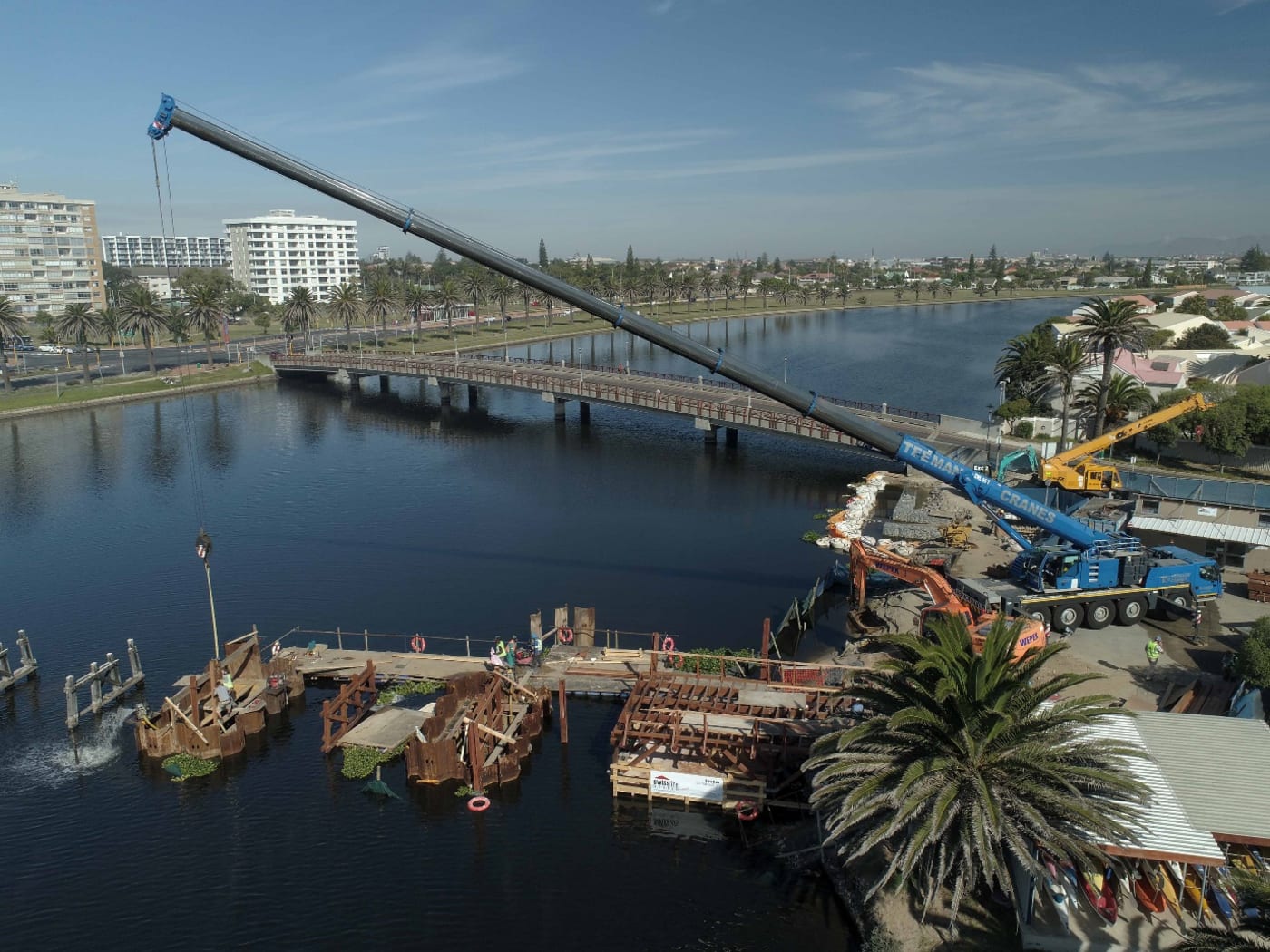 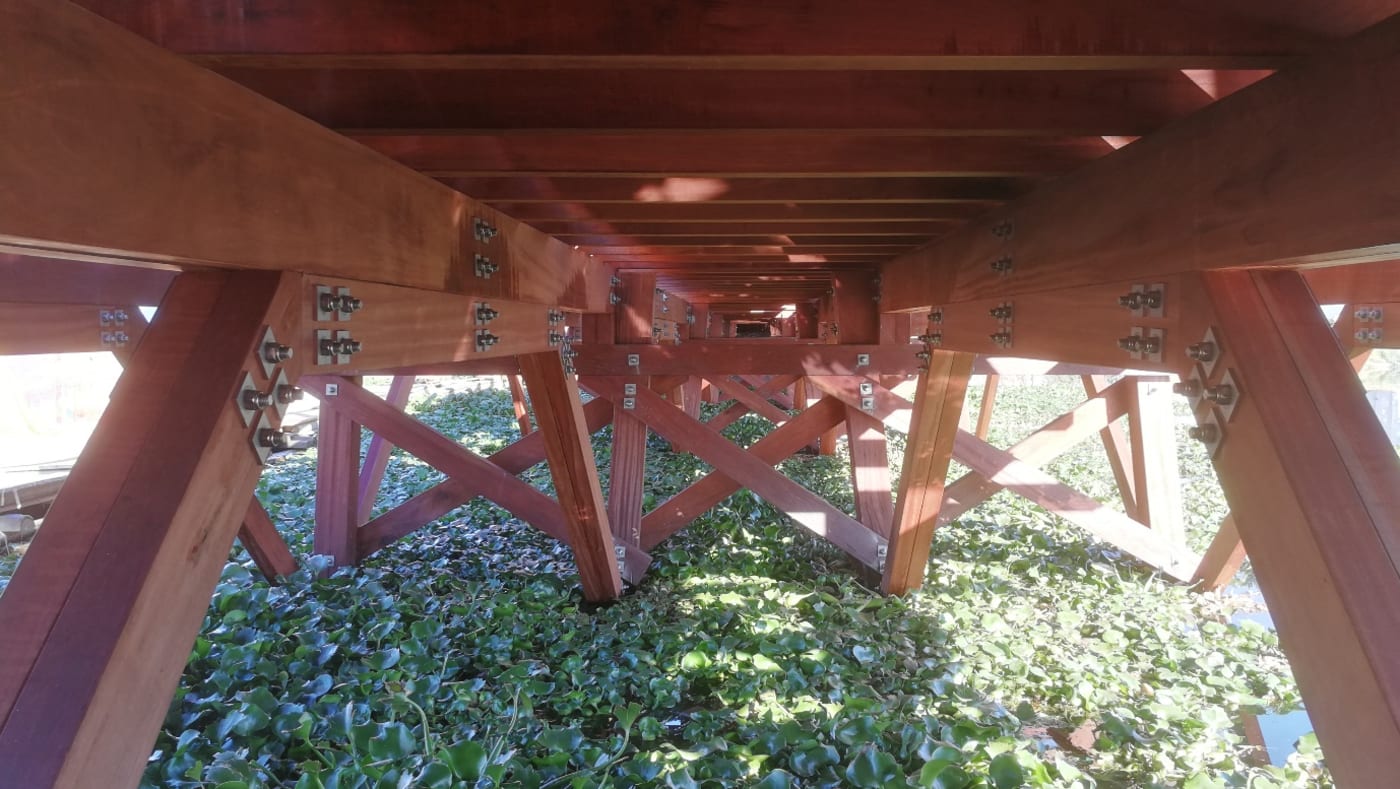 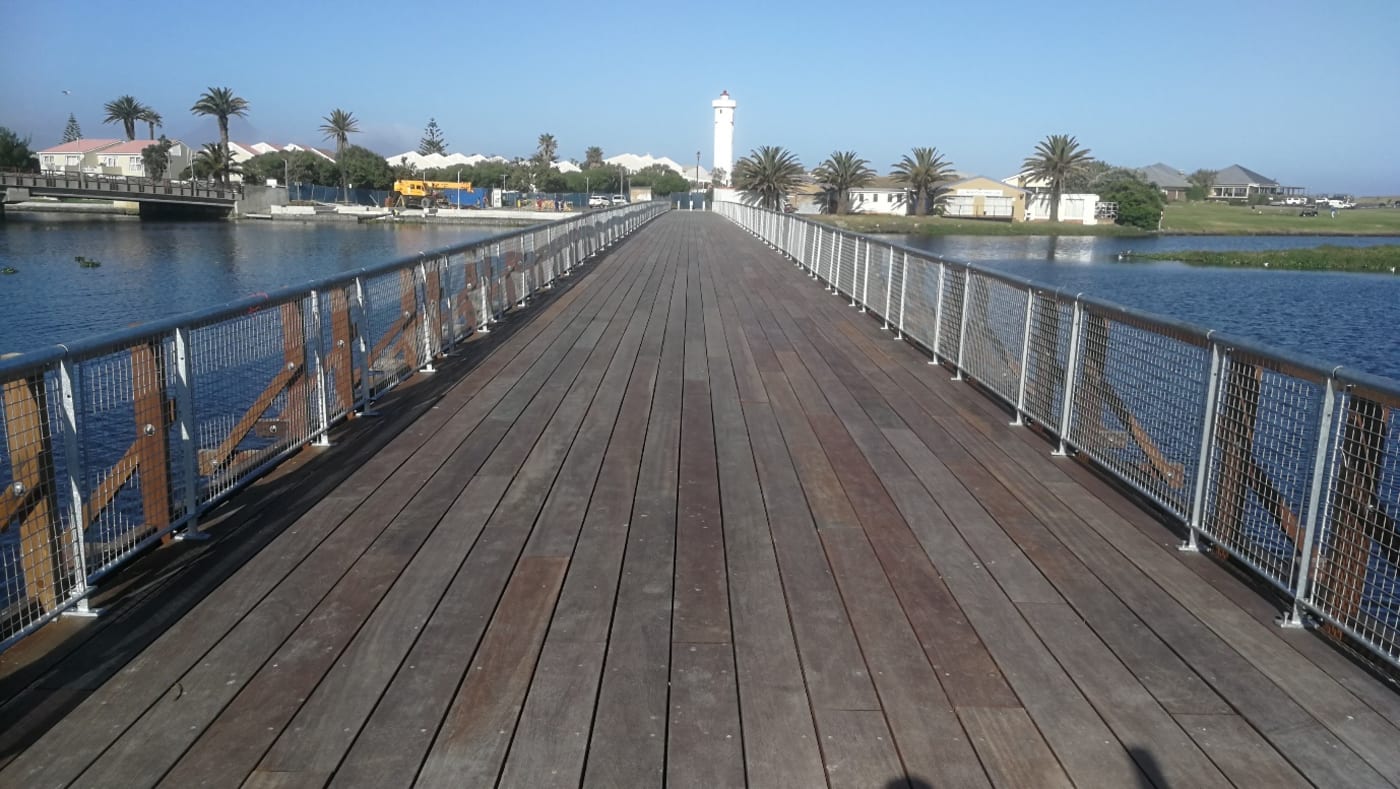 The scope of the works included the restoration of the existing ooden bridge, upgrading of the east and west embankment areas of the bridge, erosion protection along the western shore including new concrete embankments, new concrete abutments for the bridge, slipways, gabions and new landscaped gardens.

The existing bridge was Built in 1901 during the South African War by the Fortress Company of the Royal Engineers in order to gain military access to the Island.

The bridge construction included the following:

1. Removal of the existing bridge decking and structural timber
2. Installation of steel sheet caissons into the river beds around each pier of the bridge (the bridge structure consisted of 21 piers of 4 wooden piles each, which spans 120m across the estuary)
3. Excavations of each pier to a depth where the existing timber is still sound (undamaged).
4. Cutting off the existing timber piers at deviating depths depending on the quality of the timber
5. Joining new imported timber onto the existing timber piers using stainless steel sleeves and epoxy
6. Building the piers and wooden bridge structure up from the new piles
7. Installing new bridge deck and balustrades
8. Installation of a second galvanized balustrade just inside the timber balustrade to required regulation (new timber structure was built as an exact replica of the existing old bridge)

a.) The installation of the steel caissons had to be done using a 400ton crane with hydraulic vibro-hammers and hydraulic machines, due to the distances of the wooden piers from the western shore. (A vibro-hammer is a machine which is lifted by the crane and has a hydraulic pipe connected onto an excavator for hydraulic power. The hammer connects onto each steel sheet and causes a vibration through the steel sheet which drives the sheet into the river bed. The sheet can then also only be removed by the crane with the use of the vibration)

The excavation process, as well as new construction of the bridge and steel caissons was very time-consuming due to the fact that each pier had to be constructed with the use of the cranes and temporary timber access walkways across the river.

Due to the environmentally sensitive estuary, the contractor was also limited by the specifications of the project, whereby the river beds may not be disturbed unnecessarily.

b.) Work could not be done from the eastern shore since the bridge joined onto Marine drive (a busy 4-lane road joining Cape Town to the West Coast)

c.) Each pier had to be demolished, excavated, re-built and completed before the steel caissons could be removed and located to the next pier, since the estuary could not be closed or deviated, as this is an environmentally sensitive water way.

d.) The depth of each pier was unique, as well as the alignment of each pier, since the new bridge structure was constructed onto the existing piles. This meant that detailed surveys had to be done on each pile to ensure the exact level, alignment and placing of each new pile was in the exact location of the existing piles. This meant that each pier has a unique co-ordinated position and the piers are not 100% perpendicular to each other of the shores on either side, as a newly constructed bridge would be. The distance from each and every pier to one another is unique. This made the construction of the deck and balustrades challenging, since every balustrade panel between piers had different dimension.

e.) During the construction operation there was also “tube-worm” present on the existing timber and surrounding river beds. (tube-worm is a coral-like infestation that spreads quickly along rivers).

The tube-worm had to be removed from the existing timber and dumped at a chemical waste facility before excavations could continue. A separate team was utilized with chemical suits and separate bins for chemical disposal, as the tube-worm contains micro-organisms which could be harmful when in contact with skin.

A total of 210m3 of tube-worm was removed from the river in total. f.) Further challenges to the project was the timber, which was imported from Brazil, and the contractor had no control over delivery and lead times. The timber took five months to be delivered

g.) There were three major breakdowns of the vibro-hammer used by the sub-contractor who installed the steel caissons, which also delayed the project by approx. 2 months. If the vibo-hammer does not work, no other work on the bridge could continue, as the steel sheets cannot be installed, removed or moved onto the next piers without the vibro-hammer.

h.) At some stage during the construction of the bridge towards the eastern shore, the distance from the crane became a problem if the wind was blowing faster than 30km/h, as well as the power which the hydraulics could drive the vibro-hammer, since the distance is 120m

At this stage an amphibian excavator had to be used to construct the last four piers.